Part II – Journey of a Book – setting up, hanging in there

The set up, which I thought would only take an hour, stretched to all morning. Coordinating the set up of an exhibition this size with so many ‘exhibitors’ had Michelle Richards, the Brisbane Central Library’s exhibition coordinator, running a million directions at once, advising as to ‘how [it was something new to a lot of us], finding stands and  suggesting modes of  display, and generally guiding us all through to ‘VOILA!’ – one  fascinating and very varied exhibition!

But there was more – not just the glass cases to set up, but hanging around to do the hanging!  this was not as straightforward as it sounds. We had to somehow attach our paintings to fine dangling wires and – here’s the worst part GET THEM TO SIT $#@*# STRAIGHT!

Can’t remember when I’ve had so much creative fun with such a fantastic group of multitalented folk! 13th to 16th January  we arrived in from all over – WA, NT, Vic and  ‘locals’ Christian and self.  We were housed in the Gatton Motel, a leg stretch away  from the main venue, not that we needed to walk. We were chauffeur driven everywhere by local Minibus/taxi owner Sue.

This is the door to my room, the non-existent  No. 13, on 13th January, a Friday, how lucky can you get!  Interesting how many places omit room 13, floor 13 etc etc. Do folk really think we are so bound by superstition and hangovers from the dark ages that we will eschew  a room or a whole floor just because of a place in a numeric sequence? Evidently it is so.

Craig and I had joint sessions with small groups of ardent attendees in a series of workshops. All interacted with us freely and kept us on our toes with their questions.

We started with a draft of my story about the cow that swam the Brisbane river during the January 2011 floods. It was  over 700 words [too long for a picture book] but gave the background Craig needed to locate the story and characterise the little cow. This is a link to a newspaper article about her amazing survival swim.

It was a revelation and a privilege to work with Craig one on one as he sketched out his visual thoughts on the story with me reading excerpts and the audience  interspersing with comments. I cut swathes from the text as Craig’s expert hand created  wonderful image after image.

This is a glimpse of the creation process –

I love the way illustrators  climb into the  visual universe of a story. Text says a family is sitting in a kitchen. The illustrator will look over their shoulders, look out the window, go out into the next room, climb the stairs to the attic or down to the yard and see where the  house is located in a community.

The Stray – Your feedback is actively solicited! :) 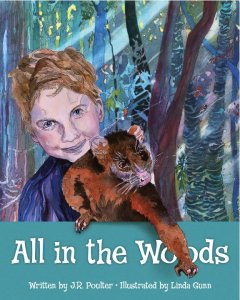 Everyone in Pete’s family is moving or adjusting to a move, it seems. Change brings challenges, not least of which are the family’s nosey, new neighbours. Everyone says what they think, but are they right? Things are not always as they seem…  and who is the mysterious little visitor who changes everything? A story that bridges generations, told with humour  and an underlying plea for the preservation of wildlife habitats.

“With sensitive and humorous prose, J.R. McRae tells a story of family life, love, and acceptance with beautiful illustrations by Linda Gunn. When Pete finds a furry hero, Ink, to solve his dinnertime woes, a nosey neighbor jumps to conclusions that enlarge as Pete’s grandpa comes to visit. When Mrs. Allan’s mother-in-law, Nanny, and Pete’s grandpa take off for an early-morning drive, the assumptions increase until Ink and Grandpa solve the mystery. Perfect for young readers, this book speaks of a boy and his grandpa, a mother defending her son from gossip, and the surprise of love at any age.”  ~Janice Phelps Williams, author, illustrator www.janicephelps.com

Promotional poster, by Tara Hale, for “All in the Woods”, Pixiefoot Press, 2011 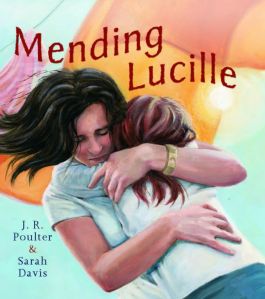 I thought I had probably long gone received the last of the reviews for my Crichton Award winning picture book, “Mending Lucille”. WRONG! Just got the loveliest, very belated review –
RADIO NEW ZEALAND:
http://podcast.radionz.co.nz/ntn/ntn-20110617-1037-childrens_book_review_with_john_mcintyre-048.mp3
Sarah Davis [my amazing collaborator, illustrator on this wonderful project] sent it to me today. It came out on 17th June this year! Better late than never!

John McIntyre gave a very thoughtful, in depth review citing the use of “Mending Lucille” by the Monash Centre for Grief Education in the training of counselors working with children experiencing grief, loss or separation from a parent. END_OF_DOCUMENT_TOKEN_TO_BE_REPLACED

This  fundraising anthology is to be an e-book – poets writers, artists, please give of your talents to help the Japanese peope in their hour of need!

A websites well worth visiting  –

Two children’s authors sharing how they are doing it and things they have learned en route.

Carol Denbow at  http://abookinside.blogspot.com has lots of writing tips and marketing tricks and lots more.

Dream Chaser Magazine  regularly features articles and interviews on new children’s writers and illustrators as well as tips and tricks by those who have been published.  Latest edition – http://www.magcloud.com/browse/Magazine/92435

Note – a new kind of Alphabet to use with older children, teens and adults in literacy classes!  I ust wonder if Karen has realised this potential for her amazing little book herself! 🙂 Folk addressing illiteracy issues in their lives have more that just that they are trying to face, come to turns with, cope with, get past. This alphabet is for them! It is therapeutic whilst it teaches, but in an unobtrusive, non-threatening way!

The book,of course, is primarily aimed at counseling and therapy settings and there is a workbook that can be purchased to accompany “Griefabet”.  But this little book is a great deal more.

A book of warm, witty, affirmations for those who are coping with grief and loss, it has a few happily playful ‘venting’ exercises thrown in for good measure.  It is also a free verse poem that celebrates life and the resilience of the human spirit. Finally, it is a work of art – illustrations use the letters of the alphabet in designs that mirror the  verse of affirmation opposite. It is a design achievement!

“Mending Lucille” – A Peak Inside

Mending Lucille has been described as …

“…a book to be treasured by all. It is the story of a young girl and how she copes with the loss of her mother. The illustrations are both stunning and sensitive… Mending Lucille is a story which will help any child coping with the loss of a loved one. It shows that time will heal but you never have to forget. The theme of grief is dealt with in a sensitive and age appropriate manner. The little girl is never given a name. She doesn’t need one. She is every child who has ever suffered the pain of losing someone they care about.”
I loved it.      “The Reading Stack”, Issue 11, August 2008, page 12

“Mending Lucille” has been nominated for two very important awards in Australia, the Family Therapists’ Award and the Crichton Award! It has WON the CRICHTON!

Sarah Davis has won “New Illustrator of the Year” in the Crichton Award for her AMAZING  art work in our picture book, “Mending Lucille” [Lothian/Hachette Livre].

It was also voted one of the 10 best children’s books for 2008 by the New Zealand Listener, the leading journal of review in New Zealand.

I am so thrilled Lothian/Hachette gave me the opportunity to go search for an illustrator and that  I found Sarah on the internet! Despite having no funds to pay Sarah for it, her  spontaneous “love it” for the manuscript persuaded her to do a sample for Lothian – the rest, as they say, is history! Thank you Sarah from the bottom of my heart for agreeing to take on the manuscript of a relative unknown and for ‘seeing’  what it had to say!

Here is the site announcement   – http://cbca.org.au/crichtonaward.htm

The annual Australian Family Therapists’ Award for Children’s Literature is awarded by the Australian and New Zealand Journal of Family Therapy (ANZJFT). A book for older readers, and one for younger readers, are awarded  for being the best books of the year to be useful for therapists in practice. A list of books recommended for use by therapists is also announced by ANZJFT. “Mending Lucille” has been nominated for the Young Readers/Picture Book Award.

Being Nominated for the Family Therapists Award is  deeply meaningful for Sarah and myself . It recognises the contribution our book has made in tackling a very sensitive topic, the loss of  a parent or central carer, and in making available to therapists, counselors, teachers and others involved with children in such a traumatic loss, a resource that is seen to be able to help the child at their point of need.  Adults too have responded  to the book and have found reading  it very therapeutic in helping them deal with such a loss of their own, often buried deep in their past.